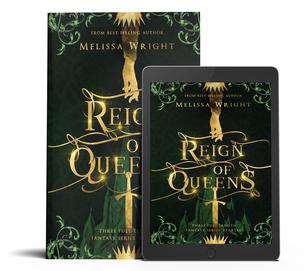 Just subscribe to the monthly newsletter below (or via this link) and as soon as you're confirmed, you'll receive a follow up email with instructions to download.

The Frey Saga Book One: Frey
Frey lives in a world where humans are fairy tales. A world where the powerful rule, where her magic is broken. That life is a lie. When dark secrets unravel, she’ll have to risk everything to rise above a dangerous past.

Shattered Realms Book One: King of Ash and Bone
When monsters break through the veil between worlds, Mackenzie Scott has nothing left to lose. Her brother is marked, her future is vanished, and all that remains is a desperate need for revenge. She devises a plan to stop them, and finds an injured stranger that just might be the key. But he's not the helpless boy he appears to be. He's one of them. And he's got plans of his own.

Descendants Series Book One: Bound by Prophecy
Aern's only job is to protect the chosen. The trouble is, she's the key to a prophecy and everyone wants her. When the opposition descends, their only hope is to stick together, but the truth unravels, and together might prove the biggest complication of them all.

Reign of Queens is a box set of first in series fantasy books by Melissa Wright, including The Frey Saga Book I: Frey, Shattered Realms Book One: King of Ash and Bone, and the Descendants Series Book One: Bound by Prophecy